A student from LIF finishes his Master’s thesis 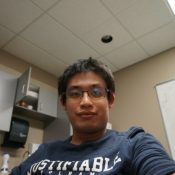 Kun Xie, an M.Sc. student under the supervision of Pr. Sylvain Hallé, has just submitted the final version of his Master’s thesis. Among other things, Kun’s project involved the development and testing of a system allowing to send streams of data between computers through sequences of optical codes called QR codes. QR codes are square regions made of a pattern of black-and-white dots, which can be scanned by the camera of a smart phone and carry small amounts of data, such as the address of a web site. The originality of Kun’s project is to use multiple such codes, alternating in rapid fashion on a screen, to send much larger amounts of data, or even data that is being produced in real time. Any device equipped with the special software developed at LIF can then film these flickering codes, reconstruct the original data and pass it on to any other application. The sequence of codes hence acts as a virtual, optical communication link. Kun’s experiments have shown that these codes can transmit enough data to carry a voice-quality audio signal in real time.

A demo of the special software can be watched below.

Congratulations Kun, and good luck in your future projects!